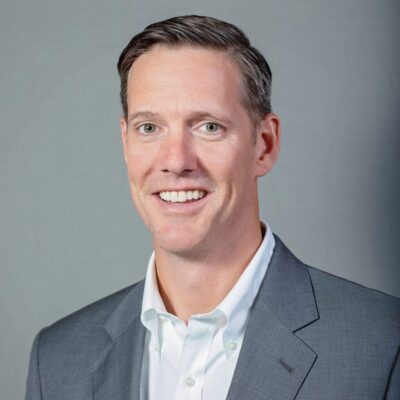 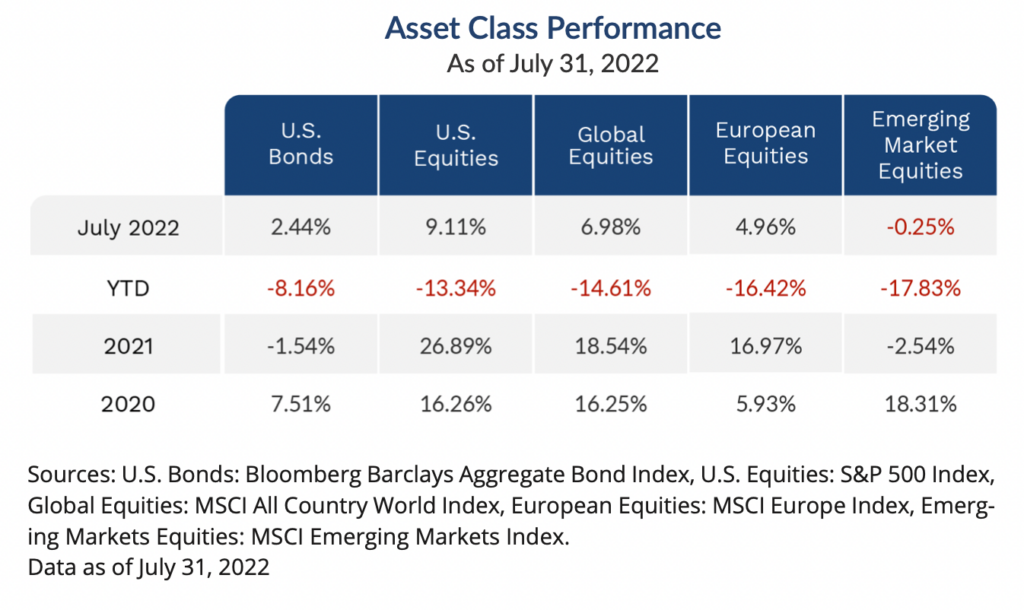 Stocks and bonds bounced back sharply after a tough first half, ending July in the green for U.S. markets. U.S. equities posted their best month since November 2020, with the S&P 500 gaining 9.1%, while the Dow finished up 6.7%. The Nasdaq Index finished 12.4% higher.

In this report, we’ll take a look at the July Fed meeting results, recession talk, and the strong dollar’s impact on earnings.

The Federal Reserve showed its resolve in the fight against inflation by hiking interest rates by 0.75% in June and July, the most aggressive two-month hikes since the Fed began using overnight rates as the primary policy tool in the early 1990s. Inflation data in June continued to support the aggressive approach, as the consumer price index reached heights not seen in nearly 41 years. Since March, the Fed has lifted its target interest rate from near zero to a level between 2.25% and 2.50%. 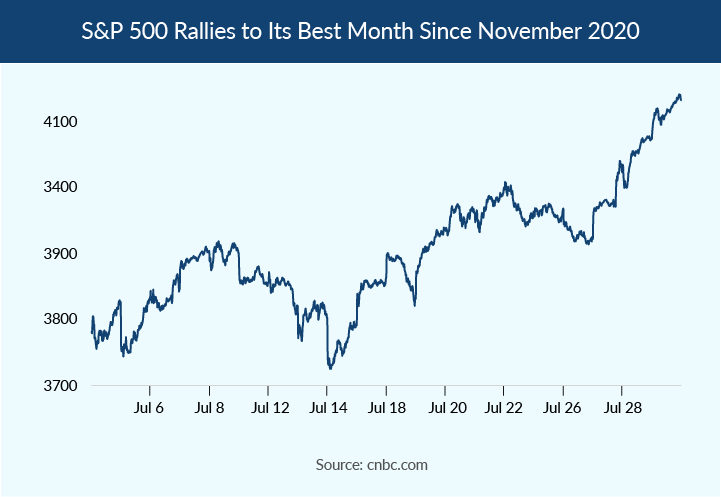 We are starting to see signs of slowing inflation, starting with gasoline, used-vehicle prices, and other inflation drivers like crops and industrial metals. The S&P GSCI agriculture index, which offers insight into food price inflation, has fallen by a quarter since peaking in May. Similarly, the industrial-metals index has dropped by a third.

A cool down in prices provides consumers with a welcome respite from rising prices while signaling to the Fed that the inflation fight is working. 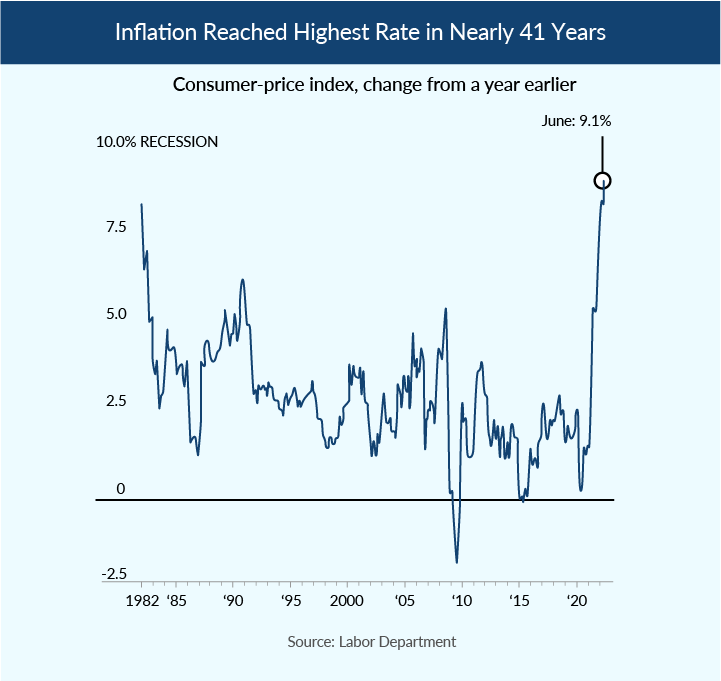 Following the July Fed meeting, Chair Jerome Powell reiterated that the central bank’s focus is on restoring price stability as soon as possible. While achieving a soft landing remains a goal, the actual path ahead is a bit more uncertain. The Fed has said it would not flinch in the focus on moderating inflation even if it results in a “sustained period” of economic weakness and a slower job market.

While this may seem negative for the economy, keep in mind that the Fed needs to maintain credibility in delivering price stability. If markets trust that the Fed can tame inflation, then the Fed won’t have to work so hard to achieve that goal because inflation expectations will start coming down, which has a follow-on effect on actual inflation.

The Fed still believes that “modestly restrictive” monetary policy is necessary under current economic conditions, suggesting that another outsized rate hike may await at the September policy meeting.

Signs of economic weakness have already appeared, as the Bureau of Economic Analysis reported a second consecutive quarter of negative gross domestic product (GDP) growth, with a decline of 0.9% for the period. GDP measures overall economic output, and two straight quarters of GDP contraction could satisfy a widely accepted rule of thumb for recession. Ultimately, the National Bureau of Economic Research (NBER) declares recessions, but they may not make a determination for several months.

Treasury Secretary Janet Yellen said she would be amazed if NBER calls this a recession because of the state of the jobs market. She said, “When you’re creating almost 400,000 jobs a month, that is not a recession.”

As Blackrock notes, the policy response to the pandemic allowed companies to build up cash buffers and even if a recession hits, they do not expect a very deep recession. However, with the current macro environment, we may be looking at shorter economic cycles. 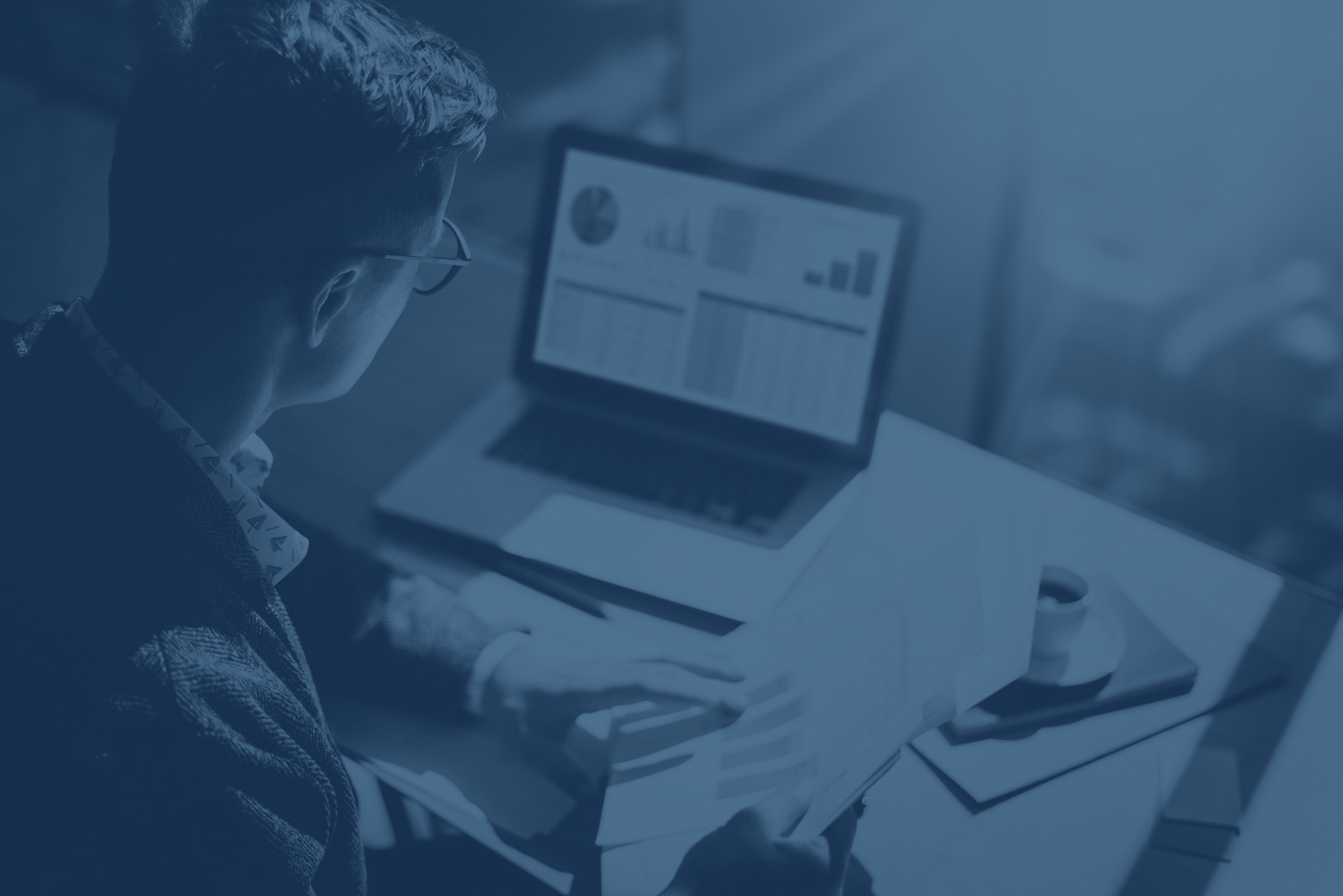 Finally, the Fed’s interest rate hikes have boosted the strength of the dollar to its highest levels in two decades. Increased demand for the dollar has been notable, especially compared to the European Euro and Japanese Yen, where central banks have been slower to react with tighter monetary policy. In fact, the dollar reached parity with the euro—a one-to-one exchange rate—for the first time since 2002. 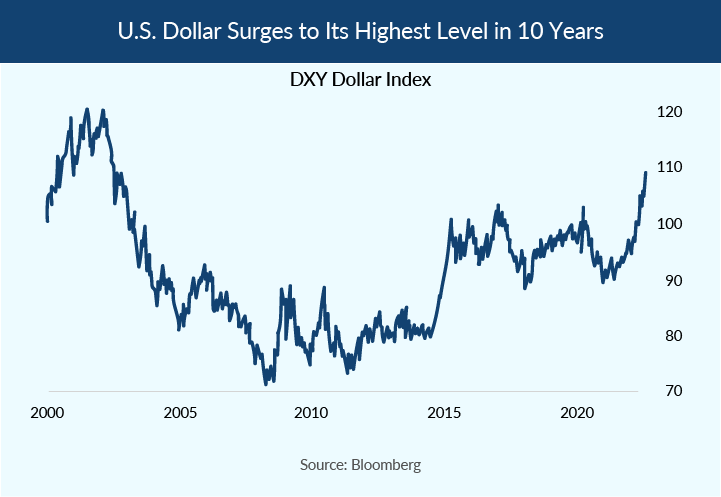 As a result, the strong dollar has wiped billions of dollars off second-quarter sales of U.S. companies. S&P 500 companies made about 29% of their revenues abroad in 2021, with tech companies more exposed. That said, second quarter earnings have still grown overall, with the expectation that they will increase 10% over last year.

Markets bounced back in July, and while U.S. economic growth went into negative territory for two quarters the job market is still strong. A strong dollar could put some headwinds on corporate earnings, though so far they remain robust. We’ll be looking ahead to the Fed’s September meeting for an indication of what might come next in terms of monetary policy.

This communication is distributed for informational and educational purposes only and is not an offer to sell or a solicitation of an offer to buy any security. The information herein has been derived from sources believed to be accurate, but no guarantee can be made as to its accuracy or completeness. All investments include the risk of loss and nothing herein should be construed as a guarantee of any specific outcome or profit. Past performance is no guarantee of future results. This information should not be construed as investment, tax or legal advice and may not be relied on for the purpose of avoiding any Federal tax penalty. All market indices discussed are unmanaged and are not illustrative of any particular investment. Indices do not incur management fees, costs and expenses, and usually cannot be invested into directly.

All economic and performance data is historical and not indicative of future results. All opinions expressed herein are those of WealthSource® Partners, LLC and do not necessarily represent the opinions or views of WealthSource’s affiliates, are current only as of the date of this communication and are subject to change without notice. WealthSource does not have any obligation to provide revised opinions in the event of changed circumstances.

The S&P GSCI Agriculture Index is a benchmark for investment performance in the agricultural commodity markets, including wheat, corn, soybeans, coffee, sugar, cocoa and cotton, and is a sub-index of the S&P GSCI, a broad-based and production weighted investable commodity index that includes the most liquid commodity futures, which is designed to represent the global commodity market beta.

The S&P GSCI Industrial Metals Index is a benchmark for investment performance in the industrial metals markets, including aluminum, copper, lead, nickel and zinc, and is a sub-index of the S&P GSCI, a broad-based and production weighted investable commodity index that includes the most liquid commodity futures, which is designed to represent the global commodity market beta. 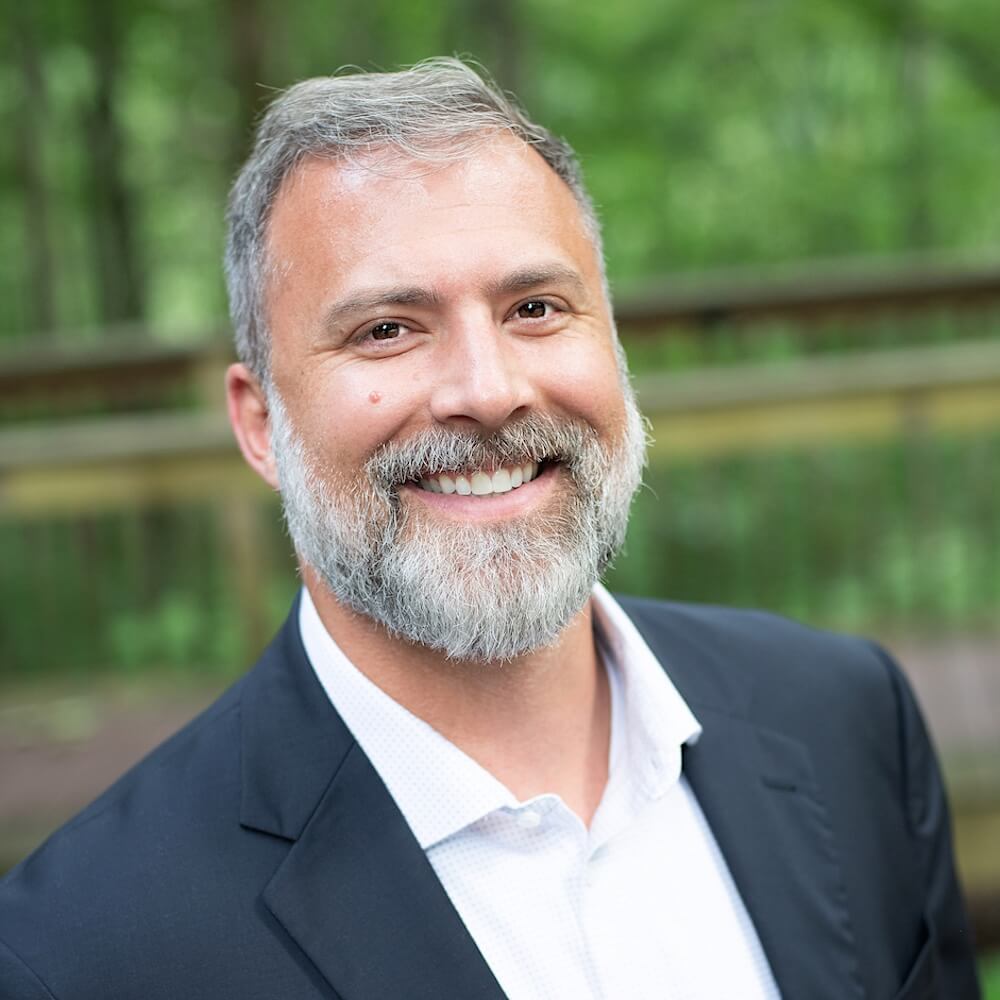